That is the time to visit Austin! Its amazing how many pristine rivers, waterfalls and springs there are to enjoy here. We had four full days to explore as many as we could and we took full advantage of it. Here’s the rundown on just a few of the natural, god-made attractions in this “weird” city.

When we’re on the road, we do our “school”work in the morning so that we can have our afternoons free to explore a forest, hike to a waterfall, check out a museum or just browse the city for as  many musings as we can find. Sometimes that’s easier said than done. But in Austin, the only problem was choosing from the array of activities to do. The weather was great though, so our selections were narrowed down to outdoor activities.

Today we made our way out to Mckinney Falls State Park. This park is in south Austin and only takes about twenty minutes to get to from downtown. During the Cretaceous Period, much of Texas was under a shallow sea. Sediments eventually morphed into limestone and have been exposed by erosion over the centuries which is evident in the rock formations near the river. Hunter-gatherers once called this area home. Under-cutting of the soil’s soft sediments exposed the limestone rock and revealed ledges for these people to call home and primed the landscape for a spectacular waterfall. In the 1980’s, water pollution from the runoff of the surrounding area forced the park to close the falls to swimmers. In more recent years, cleanup and changes in regulation have changed the water quality and it is again open for all to enjoy. And what a treat it is!  It is rare to get to enjoy a clear running river that is also warm enough to relax in. 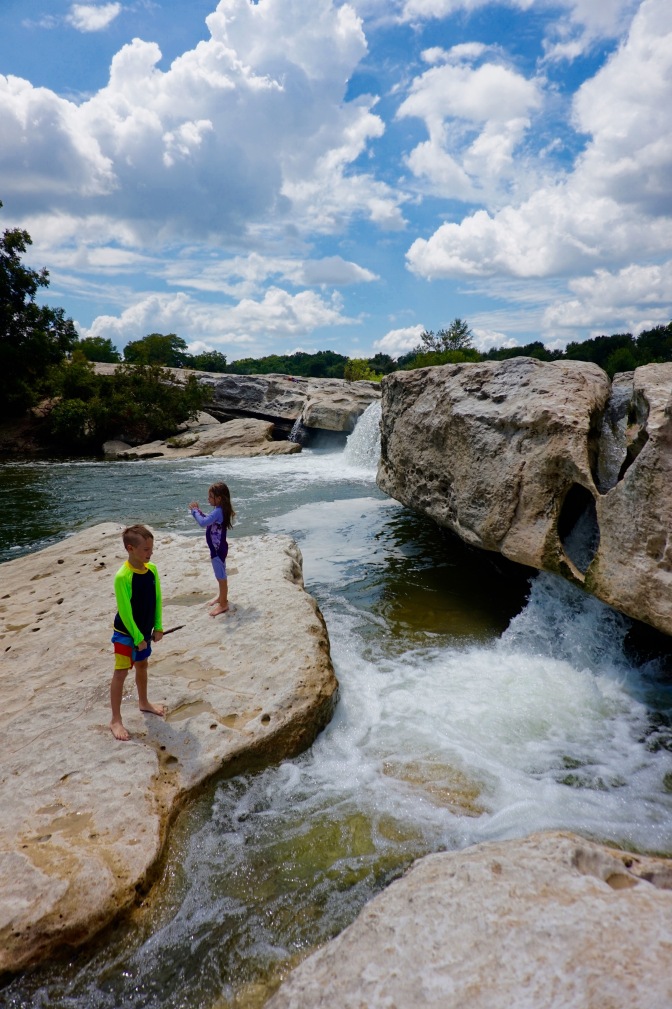 One thing that we have learned throughout our travels is that most of the cool cities in the United States have one thing in common. They have a river running through them. Austin is no exception. Barton Creek runs right through downtown and is fed further by an underground aquifer (Edwards Aquifer, but no relation :)) that adds to the mystique of the area. It is here and only here that you will find a cute yet almost extinct salamander.

In the 1920’s the city built a larger pool around the aquifer along with sidewalks so that Austinites could enjoy the cool 68-70 degree waters along with their slithery friends. A grassy area on both sides of the 3 acre pool along with sidewalks and a diving board, make the pool a lovely place to relax and take in some of the Austin skyline. 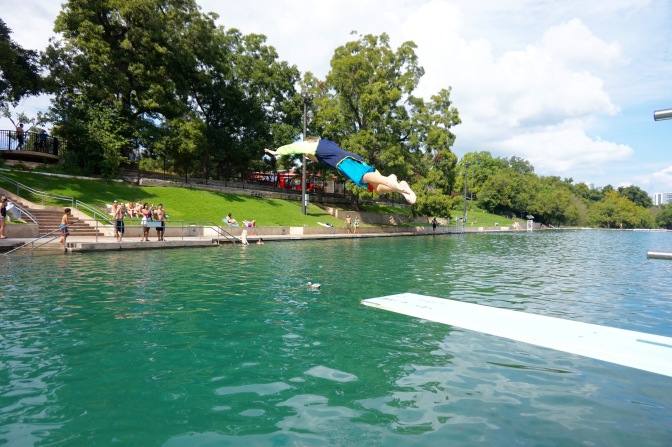 When we first started traveling, I was like a kid in a candy store, researching and plotting and planning our adventures. In doing so, I came across an image of a place I knew couldn’t be in the United States. The water was just too emerald green, the cave that hung over the pool was too other-worldly, the waterfall was just too…perfect!

And I just HAD to see it! And yes, it IS in the United States! 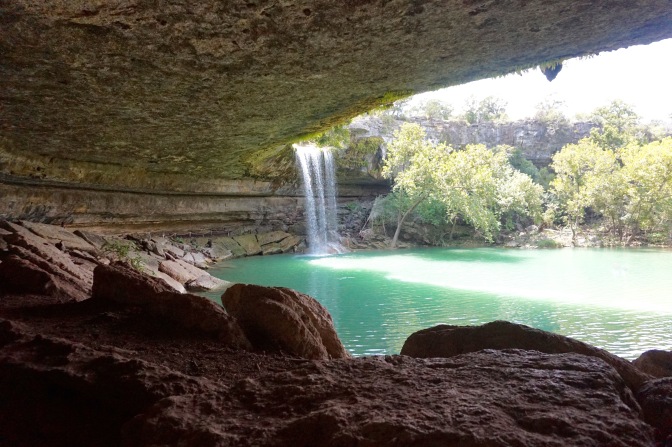 Austin’s crown jewel is found in Hamilton Pool 30 miles west of Austin. It is in a very remote drive out through the hill country. But you just know that as the miles click by and as you pass through a whole lot of nothing that there is bound to be something good. So good in fact, that you actually have to make a reservation to visit this spectacle of nature. I was told that the entire summer was booked through Labor day and then the weekends thereafter were booked solid. Luckily, our weekdays can be flexible (reason #762 why homeschooling is AWESOME) and we were able to book a Wednesday in the afternoon block from 2pm to 5pm. I read to get there early if you wanted a good spot on the beach and a shot of the beauty without 30 other strangers in your photo. So we got there at 1:30 and were the first family in! After a short .25 mile hike over somewhat uneven terrain down through the canyon, we made it to this little slice of Heaven. Because we were first in, I was able to get this shot and enjoy the peace with my kids that a place like this can bring. Even if it was for a few fleeting moments. 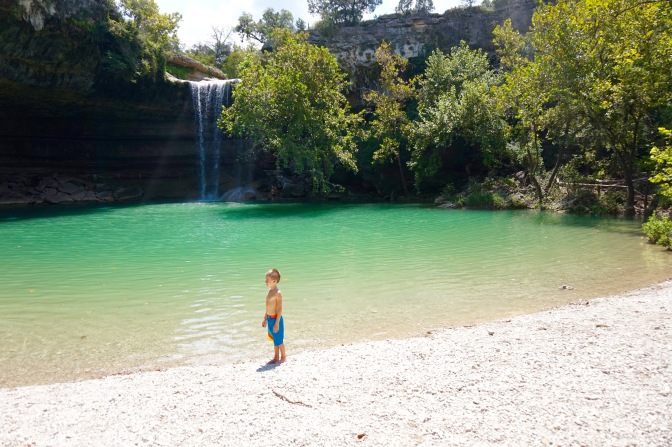 Then the masses came and the moment was over. When I made my reservation we were the last few people permitted a reservation which topped out at 36. So I was very surprised that by 4pm there were more than 100 people there. It’s not a large area so it can get a little cramped pretty quickly. Nevertheless, we were able to have a ball playing in the small waterfalls that fell from stalactite formations in the cave overhang. 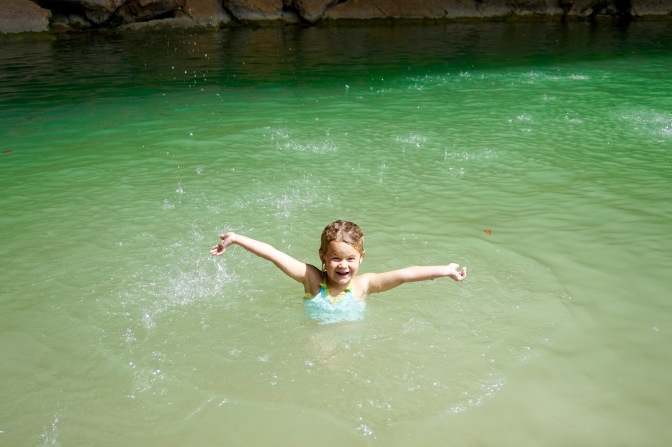 There is also a trail that leads you through the cave ledge to the waterfall on the other side of the pool. We were able to sit under the 50 foot falls and feel the immense weight of water falling from so high. Such an amazing sensation! 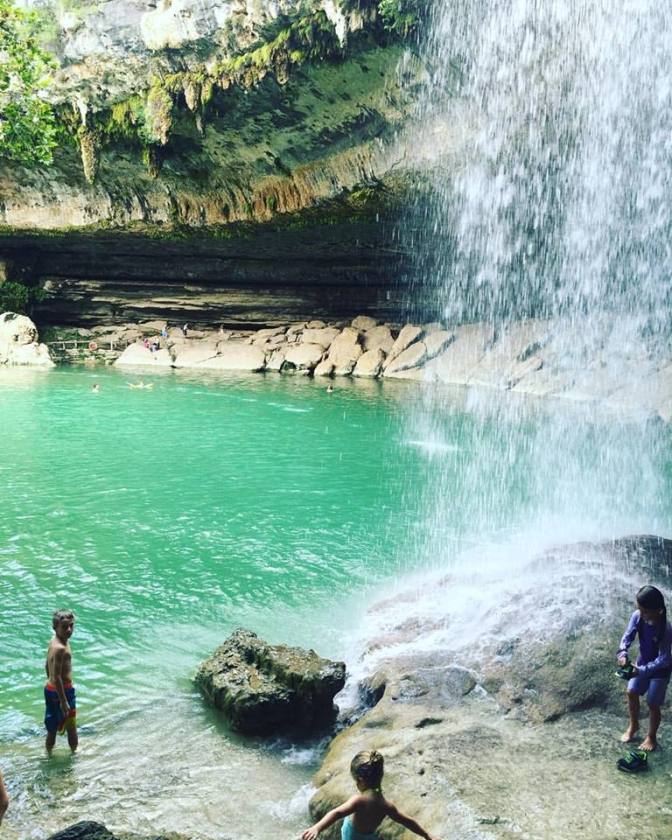 On this day we went back to the Barton Greenbelt and visited Barton Creek with the intention of hiking to Twin Falls. But when we hiked down to the creek, it was so beautiful and had so much to offer that we couldn’t tear ourselves away to hike to the falls. There was just enough of a rapid to play in for the kids. 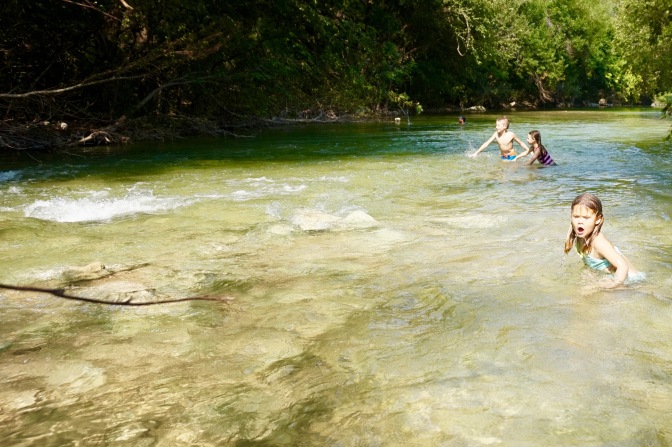 The water was so warm that I found a small pool surrounded by rocks with a gentle current running through and perched myself as I watched the kids play. 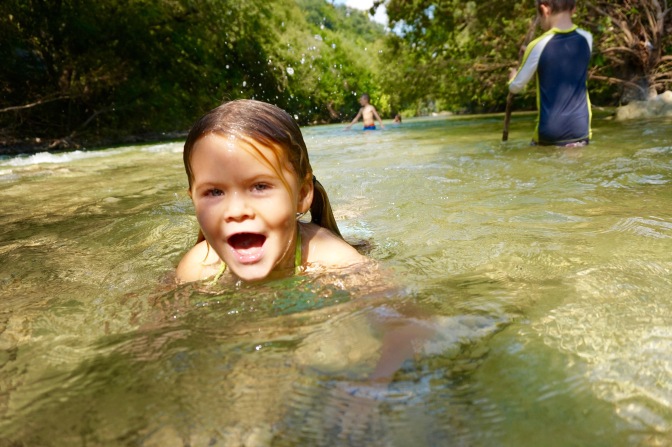 We’ll just have to come back and explore Twin Falls on our next trip. As if we needed a reason to come back. This place is fabulous!

Later on in the evening we met up with the hubby and perused downtown Austin’s food truck alley. They had everything from Italian to burgers to Thai. There was live music and the mood was very festive in spite of this hot and humid south Texas night. We didn’t have time to hang out long though because we had an appointment, an appointment with the Mexican Free-Tailed Bat!

Under the Congress Avenue Bridge in downtown,  over 1.5 million bats make there nightly exit to hunt at dusk. In fact, Austin has the largest urban bat population in the world thanks to the redesign of the bridge in the 1980’s. The bridge’s design allowed for a large crevice for the already roosting bat population to explode. Now each June, a largely female population of bats will fly from Mexico to bear there young within the bridges crevices. In October, they will fly home to Mexico until the winter is over and return the next year. This was a natural phenomena that I could not wait to see. Unfortunately on this night, the bats must have not been very hungry because they didn’t make their exit until well after dusk, which made for a pretty awful photo. 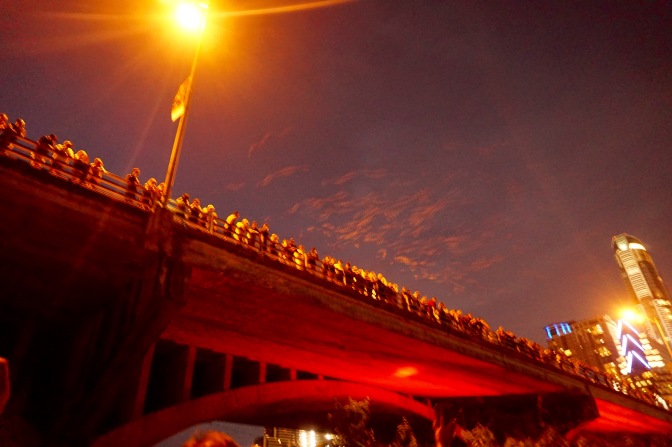 I told you it was awful but I still had to include it.

So we left Austin after four days still wanting more. I still have a list of things we didn’t get to do or see and some things that we did do that I’d love to do again. Especially with the hubby. Because doing and exploring is always best as a family.

We are a regular American family living a not so regular life. Tired of all the trappings that come with a demanding job ie, the constant travel, being away from his little monkies and their mama and not feeling like life was meant to be lived this way my hubby and I decided to make some huge life changes. We bought a RV and set out on the road to find what life could really be like as we work, play and live in 450 square feet. Come join us on our adventures! View all posts by crazyrvfamily