Oh how I love Colorado! I do believe my body, mind and soul were made with a place like this as a part of me. When I’m in the mountains I feel so alive and clear headed. And you could seriously take an entire year to do all that is offered in this great state and still be wanting for more. Each region of the state has different topography, geology and weather so if you aren’t keen on one area for one reason or another, you are bound to find just the place to steal your heart just right down the road. We have visited the san Juan DeCristo region with its sand dunes, hot springs and views to die for. We have spent time in the Rocky Mountain National Park and surrounding area and experienced it vistas, weather that changes on a dime and wildlife. But on this particular trip, we explored Colorado Springs and all the diverse offerings it brings to Colorado’s table. So much to do, so little time. So we packed in as much as we could into three days and dove right in. 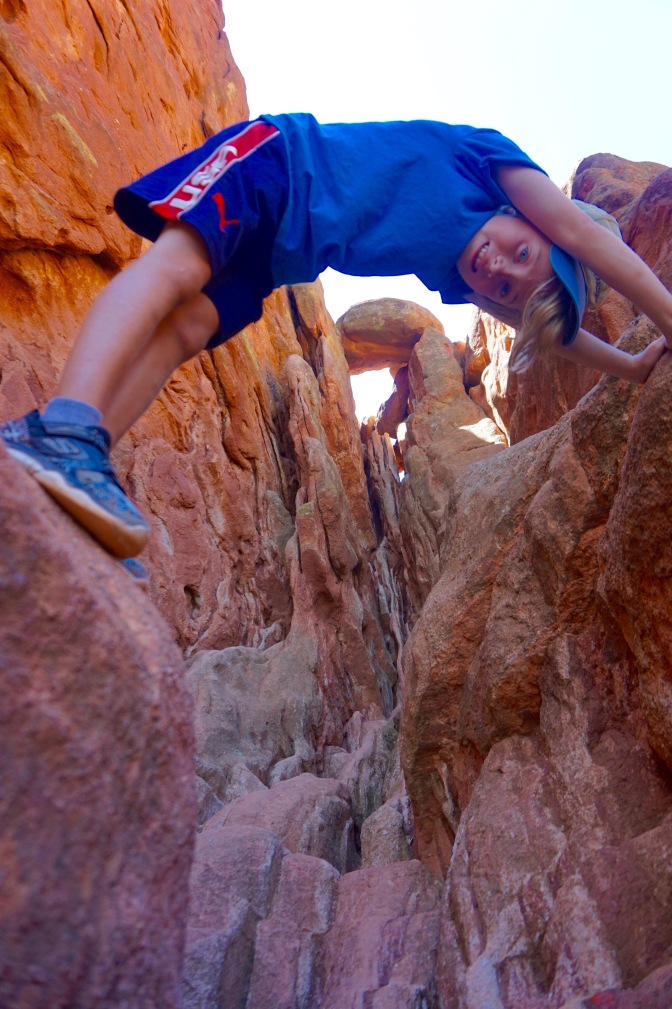 I have been wanting to visit Garden of the Gods for years. This outcropping of red mountainous stones appear out of nowhere just right outside the city. They are strikingly beautiful and tease you to explore their inner alleyways and climb their spires. The vertical stones were originally laid on a horizontal plane, but then forces created an uplift movement by the Rocky Mountains and Pikes Peak. Much of the rock formations are made of softer sandstone that continue to change and mold with time. All this to make a perfect playground for humans and animals alike. Fox, bighorn sheep, mule deer and more than 130 species of birds call the canyon home. Thousands of small holes in the spires house the white-throated swift that can be seen in abundance in the park.

Thanks to the donation of Charles Elliott Perkins, Garden of the Gods is able to be enjoyed by all for FREE! This giving man mandated that upon his death, the tract of land he owned containing the formations should be made into a park that everyone can stroll through, explore, scale, traverse and just relax in without ever being charged a dime to do so. In 1995, a beautiful interactive visitors center was also added that we all enjoyed and learned from.

Mr. Perkins, here are a few pics of just some of the children you have made so happy over the years. 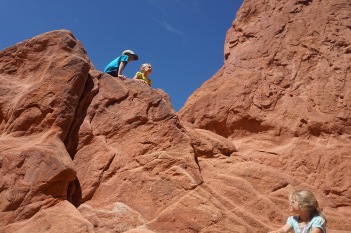 It was really hot that day, so we decided the next day to go up. Up in elevation that is, to beat the heat. Pike’s Peak was a great natural air conditioner with a temperature change from 90 degrees down in Colorado Springs to 46 degrees at the summit. 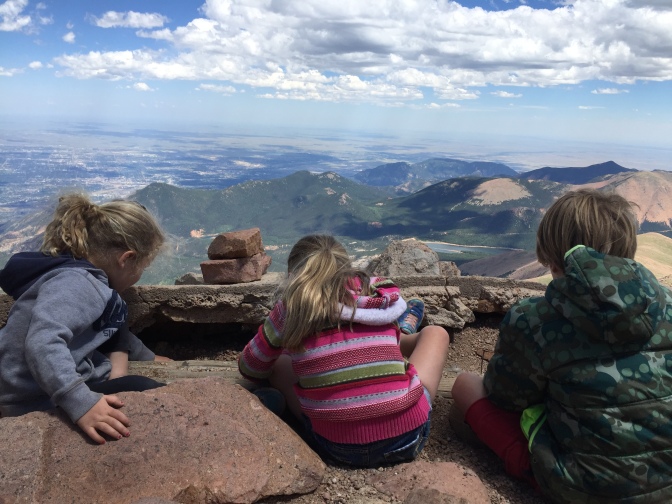 The drive was spectacular and at various points it seemed like we were just going to drive off into the clouds. After an hour of driving up, we finally made it to the top. We parked and all of the sudden I was panic stricken with the sensation of numbness in my fingers, shortness of breath and dizziness as I sat in the drivers seat. At an altitude of 14,115, my body wasn’t cooperating. My first thought was how the hell am I going to look after my kids if I pass out? Is Pman old enough to drive? No. He can’t even see over the steering wheel! But as soon as the outrageous thoughts had raced through my mind, the sensation left and so did the panic. Altitude is a finicky thing. The feeling can come and go. Usually I’m fine after a couple of minutes. Thank goodness this was the only episode of the day! We walked around the top and barged our way through the cafe, gift shop and throngs of people that had just gotten off the incline railway. I’m too cheap to ride it (it would have been $100 for me to take the kids!) so we just snapped this in front of it….and it was FREE!

We walked down the mountain a hundred yards or so and discovered remnants of past visits. We found lots of historical artifacts (nails, old bottles, cans, IE historical trash) that the kids were thrilled to sift through.You can imagine that 150 years ago it was no small feat to get your trash down the mountain. Recycling was not a thing yet back then, so it was tossed to the side and forgotten.

But many before us were inspired by the peak to do great things. The summit was first reached in 1820 by botanist Edwin James who would be the first to describe the blue columbine that covered the hills and would become Colorado’s state flower. He would also graciously name the peak after Zebulon Pike who was the first to attempt the summit in 1806 but was dangerously hindered by an epic snowstorm that would force them to turn back.  In 1873, a Summit House would be constructed to house the many adventurers that would follow. One of those adventure seeking spirits was Kathrine Lee Bates who would be inspired to write “America the Beautiful”after climbing Pike’s Peak. Many would come after and see just what was so amazing to prompt such a song for the ages. 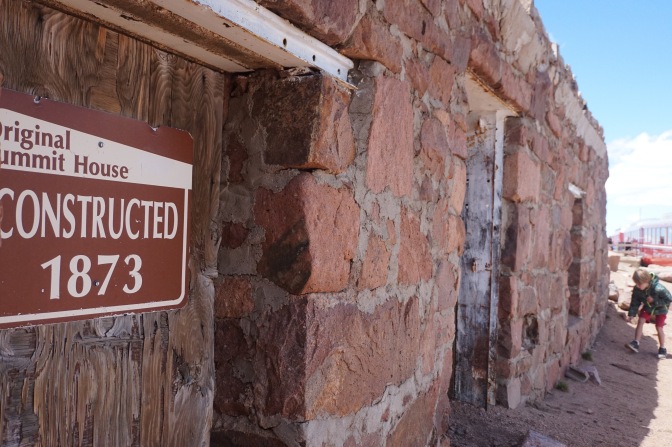 On our last day in Colorado Springs, I couldn’t help but fall into one of the areas tourist traps. We had been traveling across the states for over two years and I still had not seen any cliff dwellings anywhere in America and was clamoring to do so. Okay, this isn’t authentic, and half of the display is very commercial but we still just had to go! The Manitou Cliff Dwellings were very convenient to get to and I couldn’t pass it up. Although this dwelling is not native to the area and was relocated to Manitou Springs from the four corners area, it is still a spectacular sight to see. This Anasazi Tribe dwelling from southwest Colorado was painstakingly recreated after it was found in shambles in it’s original land.

Here you are able to walk through the dwellings, climb its ladders and read about how the Anasazi lived their everyday lives in these palaces of stone. This was fantastic fun to tour through and it was amazing how comfortable I could imagine this must have been. There was also a museum that contained artifacts and of course a gift shop. Another really interesting hands on experience was the corn house where you could grind corn the way the Anasazi would have so long ago. 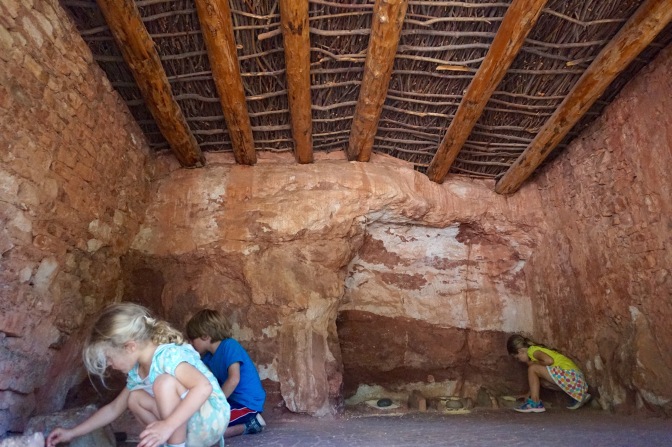 Colorado Springs is just another gem that we have been so fortunate to dig into and discover in this great state. There are also so many opportunities for hiking and biking that we didn’t get to even touch this time. But I don’t even need a reason to come back. We will be back!

We are a regular American family living a not so regular life. Tired of all the trappings that come with a demanding job ie, the constant travel, being away from his little monkies and their mama and not feeling like life was meant to be lived this way my hubby and I decided to make some huge life changes. We bought a RV and set out on the road to find what life could really be like as we work, play and live in 200 square feet. Come join us on our adventures! View all posts by crazyrvfamily

2 thoughts on “Ruins and Peaks”